8 (From the year of the manufacture)

Akari Uehara (우에하라 아카리)
Tina is one of the playable character in Closers Online. Tina is long range combat type character and mainly combined with chase effect. With her various weapon, Tina can attack enemy from far away without any trouble. Tina is full physic damage dealer. Tina is weak in close combat, but covered with her grabbing skill which always sends enemy in mid air.

Before the team Blacklambs and Wolfdog formed, there was a serial murder case where 13 Closer agent Union was Assassinated. After several investigation And collecting clue from witnesses, Union find out the one behind assassination was little girl with silver hair. Each time she assassinated her target, she was leaving no trace behind. Because her modus operandi, she was called "Ghost" By union.

Then Union make a request to Vultures to hunt down the "Ghost", and then this request trusted to Trainer, the Wolfdog Leader. When Trainer found out who is the "Ghost", how suprized he was after knowing the identity of "Ghost" itself, And then The "Ghost" detonate herself. Trainer Which survives, bringing back The "Ghost" with him to Vultures lab. Vultures discovered The "Ghost" was an Android which created by Terrorist Organization.

The Android itself its created by using The Phase Power User Corpse which Died in Dimensional War I, which the first android who able to fight with Phase power. The android abilty is "Imaginary Space", which making her able to store various combat weapon In dimensional space that she creates.

After so many consideration, Trainer made a request to Vultures to reprogram the android and make her become one of Wolfdog Crew. Trainer then call the Android "Tina" and entrust her with various important missions.

And there also one more thing that Trainer only knows, about the past of the Android which became on of his crew. 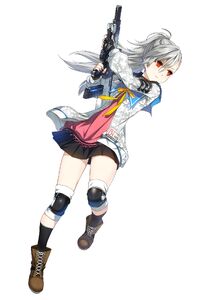 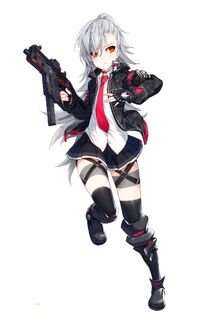 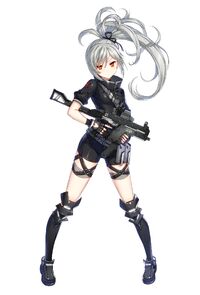 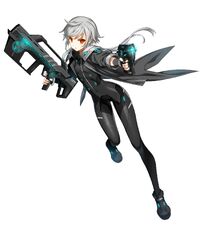